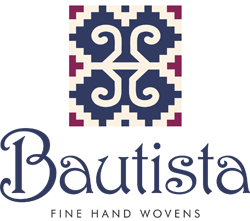 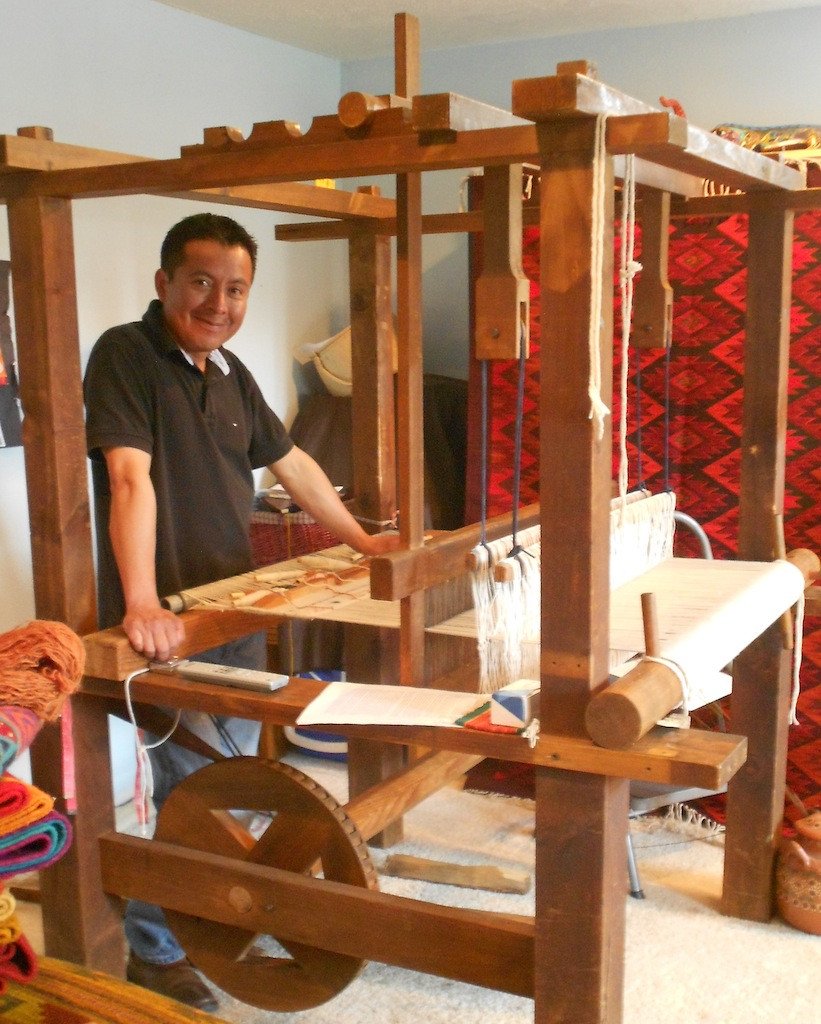 Oregonians may not have previously known about the rich weaving tradition of a little town in southern Mexico called Teotitlán del Valle, but because of a young family who have moved to the state, many of us are learning now.

Francisco Bautista is a fourth generation weaver in his Zapotec family. Both his father and his mother still live and weave in Mexico.

The Zapotec are an indigenous group of people whose ancestors have lived in what is now the state of Oaxaca (where Teotitlán lies) for thousands of years. For many years the Zapotec in Teotitlán excelled in their weaving on portable backstrap looms. Their textile skills have been recognized by one outside group after another.

The Aztecs, who ruled parts of Oaxaca beginning about 1350, exacted large quantities of embroidered and plain fabric from the village. The Spanish conquistadores wrested power over the region by 1521. They brought devastating diseases and hardships to the Zapotec, but they also brought sheep and the large frame treadle loom, introductions that changed the direction of weaving in Teotitán.

With the larger loom, Teotitlán’s weavers could produce larger items like blankets and serapes. Taking the shape of a blanket with an opening for the head, the serape sheds water marvelously when woven from wool. Zapotec weavers used them in trade locally as well as in other parts of Mexico and beyond throughout the 18th and 19th centuries.

Tourists from other parts of Mexico began to visit Oaxaca regularly after World War II, and people from the United States and Europe joined them in sizeable numbers when air travel to the region became easier during the 1970s. By that time, Teotitlán’s weavers had begun weaving wool rugs for the touring buyers instead of serapes.

Like most other weavers in present-day Teotitlán, Francisco’s family weaves wool rugs for a tourist market. They dye their own wool, weave on treadle looms, and use tapestry techniques to create geometric and other designs. The first design element that Francisco learned to create was the “grecas” symbol, seen below in a recent piece.

You can find the band of repeated grecas patterns near the top of a rug that hangs in Francisco’s studio. 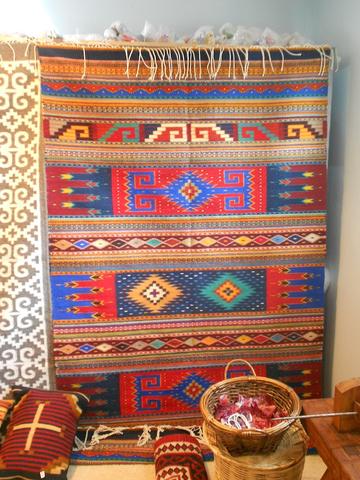 Also hanging in Francisco’s studio is a very large rug in two natural (undyed) wool colors. Francisco has featured the pre-Columbian carocol or snail design long used by Zapotec craftspeople. Even when Francisco uses a traditional design element, he exercises great creativity and knowledge as he arranges them and combines them with other design elements. In his large natural colored rug, he alternates the caracol design with stepped diamonds and crosses, making the overall composition his own. 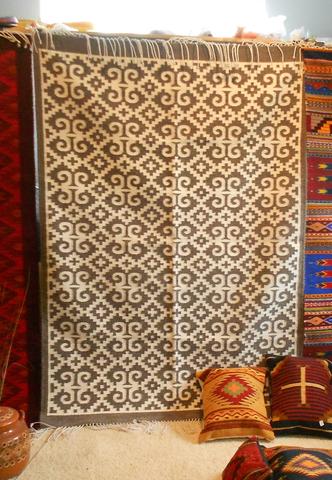 Just like other acclaimed Zapotec weavers from Teotitlán del Valle, Francisco uses designs favored by Navajo weavers of the American southwest along with those he identifies as Zapotec. He visited the Navajo Reservation and left with a feeling that Navajo design is much like Zapotec design. In fact, we learn from critical studies that, like Zapotec weavers, Navajo weavers have had many outside influences. Among those were early designs that came from Saltillo, Mexico around the turn of the 19th Century.

Francisco explains that the rug in reds hanging on his wall behind his loom has both Zapotec and Navajo design elements. 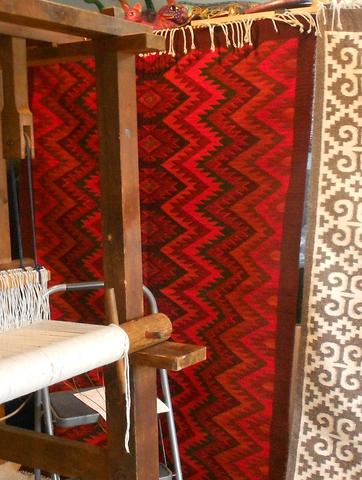 Using a family treadle loom he brought from Teotitlán, Francisco weaves with several bamboo bobbins onto which he has wound various colors of “weft” wool. He gradually builds up his pre-determined design features as he covers the all-white “warp.” (Warp consists of the parallel set of threads stretched from front to back on the loom. The weft threads interlace the warp.)

Before he can begin to weave, Francisco hand dyes all of his weft yarns (which have been handspun in Mexico). He generally uses natural plant or insect materials instead of commercially prepared dyes. Francisco finds many of the dye materials, like marigold flowers and onion skins, near his Oregon home. He must order the indigo for his blues and purples and the cochineal for his reds and oranges. Francisco demonstrates how the dried cochineal insect immediately exudes a red color when crushed. 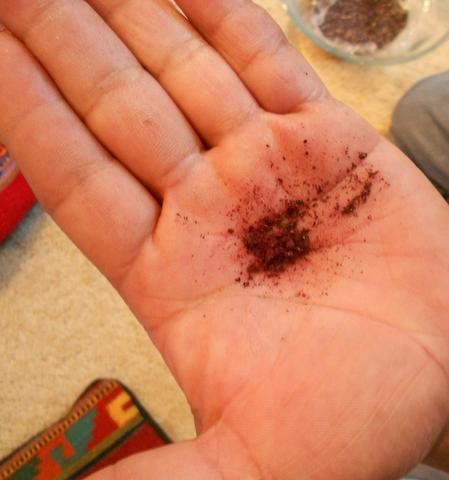 Francisco and his wife Laura Gutierrez moved from their home in Mexico to Oregon in 2003. They wanted to raise their family in a safe place, away from the strife occurring in Oaxaca. They also needed to find a new market for their weavings. Conflict among political and governmental groups, along with the downturn in tourism after September 11, 2001, caused tourism to plummet in Teotitlán. Before that time, interior designers and other buyers from the United States and Europe had brought relative prosperity to several rug weaving families.

Francisco and his young family have flourished in their new home in Sandy, Oregon, a small town situated between Portland and Mount Hood. Weaving has once again become a family enterprise. Laura now both weaves and does the sewing necessary to construct the decorative pillow cases they produce. The couple’s young daughter loves drawing and already has excelled in weaving small woven pieces.

Below see one of the Francisco and Laura’s pillows that Handcrafted Art Traditions carries. 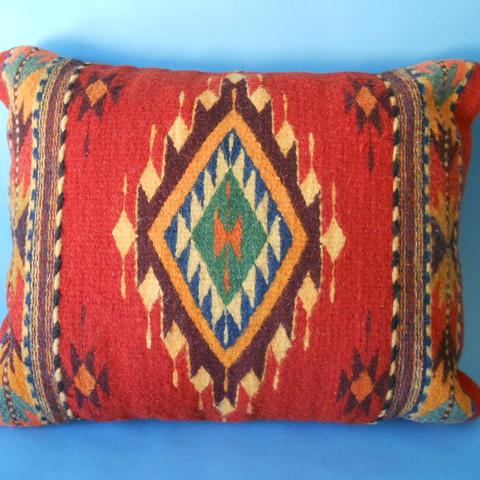 Francisco is an active participant in the Portland Handweavers Guild and has made many friends among the local weaving community. He generously donates his time to demonstrate at festivals like Art in the Pearl, where Guild members strive to spread the love of spinning and weaving to members of the public. 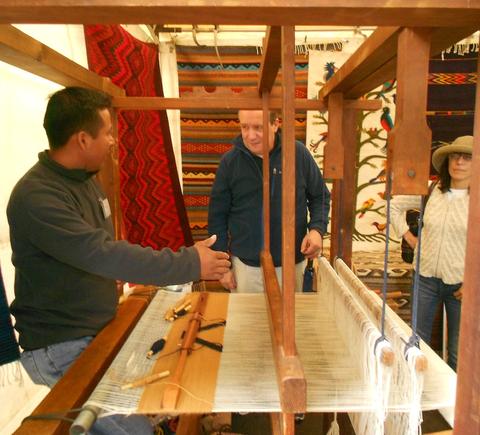 Francisco loves to weave the old designs, but he cannot hide his enthusiasm for weaving his original contemporary compositions. He recently sent me photos of a new creation. To prepare the yarn for this piece, he first gathered leaves from a walnut tree (very common in western Oregon). 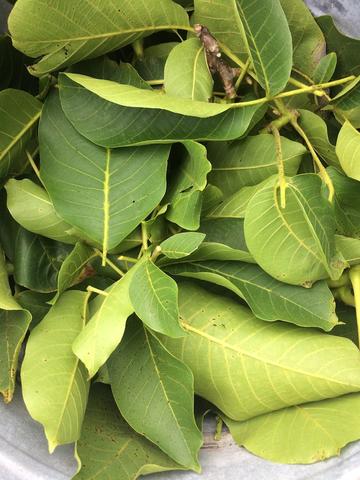 His dyebath includes both the leaves and his skeins of washed white handspun wool. 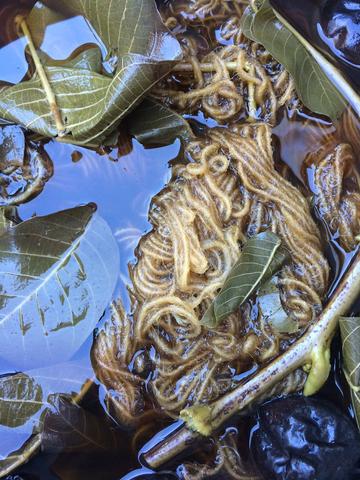 He hangs the dyed skeins to dry. 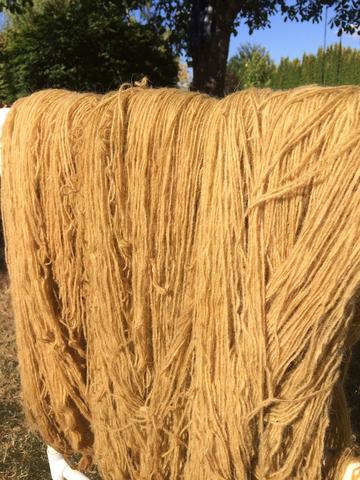 After winding the dyed yarn onto his bamboo bobbins, he begins the weaving process. (The wooden tool that extends across the width of the warp is a “temple” and is used by weavers to keep the selvage edges straight.) 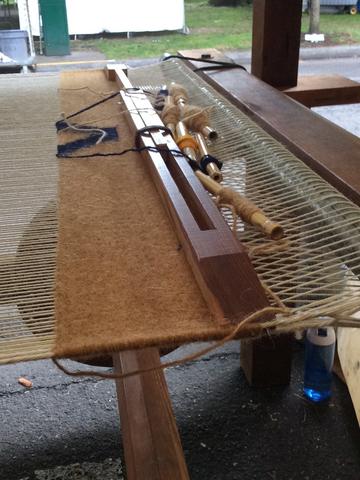 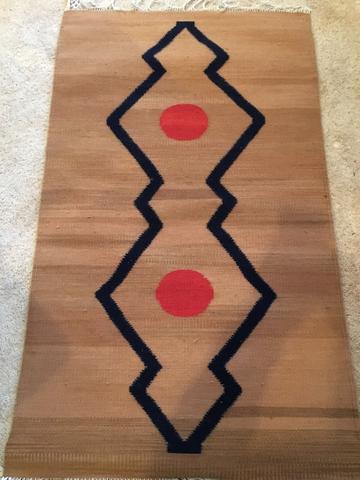 To see more photos of the Bautista family in Oregon and to contact them about a rug, please go to www.bautistaweaving.com,

You will find pillows with the Bautistas’ lovely woven covers at www.handcraftedarttraditions.com/collections/francisco-and-laura-bautista.

The more I tried to learn about Zapotec weaving, the more I realized that it was a subject that would require much study to truly understand it. I made just a start by reading Zapotec Weavers of Teotitlán by Andre Fischgrund Stanton (with great photos of rugs taken by Jaye R. Phillips and Made in Mexico: Tradition, Tourism, and Political Ferment in Oaxaca by Chris Goertzen. For a short explanation on the background of Navajo rug weaving, I consulted Laura Marcus’s essays in New Mexico Fiber Arts Trails: a Guide to Rural Fiber Arts Destinations. Francisco suggested that I read books by family friend and cultural anthropologist Lynn Stephen to gain understanding of how modern-day social and political situations have impacted the lives of Zapotec weavers in Teotitlán. I am delving into two of her books currently and am eagerly waiting to get her 2005 edition of Zapotec Women: Gender, Class, and Ethnicity in Globalized Oaxaca. And yes, Wikipedia has useful articles too.